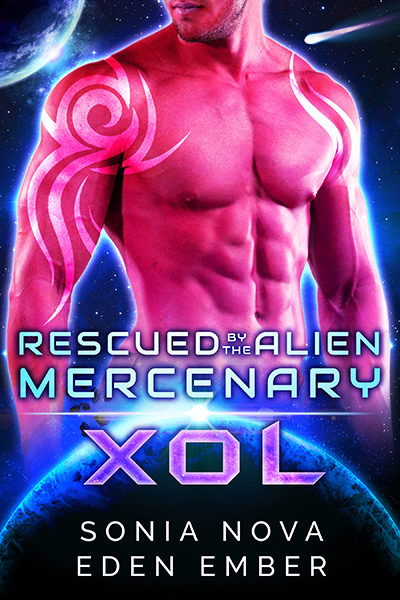 Here is a preview of the first chapter of the book. I hope you enjoy!

“Seriously, we can’t leave Elrilia knowing how many are enslaved here. The same ones who took Joss took me and brought me to Auxa. It won’t stop unless we do something.” Ava looked from Brazen to Kreg while Joss and Ryz agreed with her.

Kreg looked down shaking his head. “You ladies have pulled at me and changed my crew into rescuers. We were hands off until you stepped on board the Zalke.”

Brazen hung onto his hand and swung it. “If I recall right, you shot the rocket that caused the house fire and for the need of rescue. I’d say you’ve done an exemplary job thus far. Besides, how better than to recruit for the new mission of not only stopping the slave ring but in rescuing those captured?” Her smile and batting eyes always garnered an agreement from Kreg. He became her slave once they mated. Blah.

Joss stepped up doing the same as Brazen. Ava balked at their love, their sickeningly sweet relationships. Something about an Irrodian and a Terran mixing together brought about a pile of pure mush. Ava never trusted aliens before though she’s had to count on them many times. The near miss of slavery gave her a new lease on life. The horrors flashed before her after listening to Joss tell about her capture and enslavement. The only purpose she had now was to set the captives free. And that involved aliens. So be it. She’d work with them as long as they behaved. She wasn’t so sure that Kreg and Ryz did something to Brazen and Joss to cause them to mate. Mating. Ugh. Such a crude term. Even though Brazen explained it really meant love, the taking of a life partner like a human man takes a human wife. Out here in the galaxy there were no engagements or weddings. Just either you have a mate or you didn’t. She was out to prove one didn’t  need a mate to thrive and survive.

“I’m in agreement. Joss nearly lost herself in this and I nearly lost myself in rescuing her. I will do what I can to help those in need. Kreg, this is our duty. We’ve tried the other angle and knocked down a few. By rescuing many, we really take the edge out of the slave owners. Then when we have more intel, we hit them where they hurt and bust the slave right open. It’s simply the right thing to do.” Ryz spoke such true words even though he’s going after Joss like a lost puppy.

“We won’t risk your capture. Xol will be your guard and help,” Kreg said.

One glance at Xol and Ava felt a hard thump in her chest. His thick arms lifted the crate they’d take into the city. The Captain was kind enough to secure a small apartment for them under the guise of fictitious names. Xol and Ava became Glerx and Radiod.

“Really? I’m an android?” Ava shook her head and rolled her eyes at the guise.

“You look too Terran not to be,” Xol countered. He took notice of her a lot, she often caught him staring at her. Part of her wanted to retch at the thought of an alien panting after her and part of her felt intrigued that one would find her attractive.

“Just so you know, I won’t answer to Radiod, better use my real name. It’s not like these beings speak Terran language anyway.” She tapped the implant behind her ear, making sure she could understand Xol. It had been adjusted to understand the Irrodian language after being rescued by the Zalke.

Xol’s tough exterior was off-putting as he clamoured ahead of her on the road. He knew nothing of chivalry. She stumbled along behind him, carrying a large bag with stuff she’d bought on Ariyn’mag and their weapons. The alien was to teach her how to use them. That ought to be fun. Again, her eyes rolled.

“You know, I’m quite a bit shorter than you. At least walk slower,” she called.

He paused and grinned as he turned. “Perhaps you’d like for me to carry you then?”

Ava stopped and glared at him. “I’m capable of walking, but I don’t have long legs like you. Leave me behind and I’m not sure I can act like an android.”

He chuckled as she caught up to him. “You know what aliens like me do with androids?”

“Surely, you jest?” His quizzical look caused her to laugh. “I mean, are you joking?”

“Oh. No. We use them for slaves. And other things.”

“You’re disgusting. I suppose you’ve used one in that respect?” Why did she even care?

“Me? Would you really like to know?” The grin stayed plastered across his face.

The small apartment had little to offer as far as comforts of home were concerned. It didn’t matter, she’d lived on a space station in a little hovel below the eatery where she worked before being captured. All her personal belongings, what little there was remained in the hovel. At least when captured, they gave her clothes, such as it was. Nothing too great, just rags really. Captain Kreg generously let them shop on Ariyn’mag for clothes. At least, she had that.

“Which sleeping berth do you want?” Xol waited for her decision.

The small apartment really only had two rooms, the main room with the kitchen island, a pair of chairs and a tiny table between the two with the sleeping berths formed within the walls. Two there, adjacent to the other, with a curtain for privacy. She gingerly sat on one, trying it out with a slight bounce and smiled at the alien. “This one.”

“Great, I choose this one then,” Xol said as he pitched his rounded bag of personal items within.

“Is there anything you need? I have a currency card so we can take care of food and such.” Xol’s concern for her warmed her heart. Though she had a great mistrust for aliens in general, at least he was nice.

“I can’t think of anything. I’m quite accustomed to getting by with very little,” she said.

Xol sat on his bed and stared at her. “I would like to hear your story.”

Ava blinked at him. “Really?” Maybe he was just being nice and asked to pass away the time or maybe he was genuinely interested in her tale.

“Of course. We need to get to know one another to pull off the infiltration of this planet, and to help with the slaves. It’s not like we can just bust in and rescue them. It’s a slow process so we don’t get caught and most importantly that you aren’t grabbed.”

“Why? Would they not appreciate an android?” Ava made moves as if she were computer controlled. She’d been around enough to know how they operated.

“It’s very important for you to act like an android while we are here. I need to know you better to help you through this.”

Ava really wondered if he were sincere. Or if he just wanted to get to know her to have a fun time and leave at that. One thing she would not put up with was being a fun project to toss to the side after. In this hostile existence she needed to find the one who would look after her and help her grow into her full potential.

“Okay, first we train you for combat,” Xol said.

Ava’s brow furrowed. “I thought we’d sneak around and see exactly what we’re dealing with here and then train for the mission.”

He stepped to her, rubbing his hand over his face and towering over her. “I’ve done this before, we need to train first. It’s volatile out there and we don’t know what we’ll face.”

“You’ve done this before? I thought you and Kreg and the crew hadn’t exactly done the rescuing part?” Ava’s hand settled on her hip.

“We’ve had dealings in all parts of this. There have been times a crew member was captured and we’d have to rescue them. It’s no different. You’re to do as I say, I’m in charge here.” He pivoted and opened the crate. He chose several small weapons, turning to size Ava and stood.

“I suppose I’ll just have to mind you then?” Ava flipped her hair over her shoulder. The bossy brute didn’t turn out to be so nice after all. Still, when he glanced her way, her heart let her know otherwise of feelings budding to the surface.

“Coming?” Xol ignored the cutting question and marched out the door with weapons in hand.

They crawled on a zoomer and drove outside the city of Elrilia and to a remote field. Others were busy on the edges.

“Who are they? Shouldn’t we hide?”

“Them? No. They are like we are here to help in the effort.”

The news surprised Ava. “You didn’t tell me there were others?”

“You think we’re here alone? No. Our mercenary friends are always nearby and ready to help and serve. Kreg’s already called for help. These people won’t bother us. They have their own jobs in the greater mission of busting the slave ring. I know people.” He grinned as he pulled out a small dagger and handed it to her.

He laughed, deep reverberations. “No, see the target?” His finger pointed to a propped board with nothing on it, across the field.

“You’re crazy. You want me to throw it that far?”

Again, he laughed. “I want to see what kind of strength you have. Start out far and we’ll adjust.” He picked up a dagger and threw it perfectly as it sailed through the air and landed square in the middle of the target.

Ava giggled as she held up the dagger as he did and tried. It flew a third of the way and landed in the grass. “Well, there’s your answer.”

“Have you ever had training?”

Ava frowned. Her sad story sent her tumbling through space stations, hiding on space crafts to make it to another and her skills barely had her surviving until she landed the job before being captured.

“No. Seems my life hasn’t presented me with such opportunities. I read when I can, I learned about pressure points on most beings, but that’s about it.”

“Ah, hand combat. I’m sure there’s more to learn. It’s best we keep you from being handled though. Good to know, but let’s learn how to tear one limb to limb.”

Xol brought her closer to the target and helped her hold the dagger while jabbing. His body wrapped around her as his hands guided hers. His heart thumped at her back. The urge to turn around and kiss the red Irrodian grew impossibly strong. She had to pay attention and learn the training and not think about such things.

He kept her moving until she was ready to drop. “Please, I’m tired. Can we go back and rest?”

“Not until you’ve mastered the dagger.”

“You have to. Time isn’t a luxury here. Now, jab and pitch. Until you can nail the center of the target, we’ll keep going. Even if it’s all night.”

She worked hard, concentrating on his advice. The bullying way he trained brought a distaste in her mouth. The fuzzy feelings she had earlier left. He was indeed a slave driver. Finally, she pitched the damn thing and it nailed the center. He plucked it as if it were barely in the wood and packed it into the bag.

“Tomorrow I’ll teach you to use the blaster.”

I hope you enjoyed this preview chapter!

Ryz is Available for Pre-Order on Amazon! Coming on May 14!